It’s been a while since I ran the numbers on how much Jeff and I give.  Recently we figured out what we gave in 2012: it was about half our income.  In 2012, Jeff was working as a computer programmer and I was mostly in grad school, then starting a job as a social worker towards the end of the year.

In the interest of transparency, here’s what we did with the money: 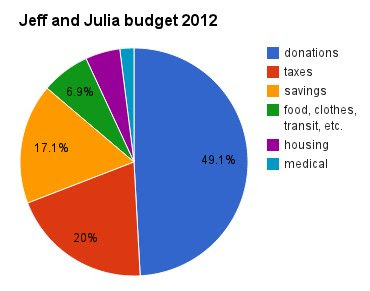 (Note: it’s surprisingly tricky to figure out what counts as income and donations — for example, if I do a job for someone and ask them to donate instead of paying me, does that count as me donating or the other person donating?  For simplicity’s sake, this post will use the income and donations from our 2012 tax return.  More detailed information on Jeff’s website.)

These numbers are atypical, because Jeff earns more as a computer programmer than most people do.  (He’s an example of the earning to give model — if you want to be able to donate more, seek a higher-paying job.)  We also save on living expenses because we’re two people living together.

So let’s look at how I might budget if it were just me. This hypothetical budget is based on my earnings as a social worker from the past year, including four months when I was unemployed.  My total income was around $38,000 (close to median personal income in the US). 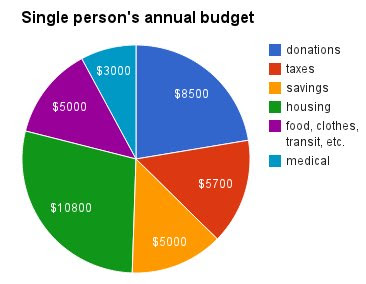 So even on a modest salary, it’s possible to give a significant amount.  You don’t even have to live in a cardboard box, I promise.